Your favorite witch sisters are back, this time bringing in a 3rd sister to join them on the reels of the Bubble Bubble 3 slot. Winni, Willow, and Wanda will provide you with the best fun ever and many chances to make wins on every witchy spell!

Set on 5 reels this slot has 50 fixed paylines where all symbols pay left to right including scattered Crystal Ball. It is charged with Winni’s Magic, Hextastic Symbols, Magic Scatters, and Mega Magic Features.

This game has the Crystal Ball as a scatter symbol and two Wilds, Willow Witch and Wanda Witch. Both of them appear on reels 1 and 5, respectively, during normal games. The witches count for all symbols including scatters. Plus, they count once on their reel for scatters.

Wild Winnie only appears during the Winnie Returns feature. It counts for all symbols except scatters. Last but not least, this slot has a win-win feature that is active during the Wilder Witches feature.

One of the 3 features is awarded when 3 or more scatters appear left to right. The player should touch a triggering Crystal Ball to reveal one of three features. There are Winnie’s Magic, Winnie’s Hexastic Symbols, and Winnie’s Magic Scatter.

The Winnei Returns feature awards 20 free games. Up to 9 Wild Winnies are zapped onto the reels after any scatter win is paid. The feature can be retriggered, with retriggering scatters counted before Wild Winnie appears on the reels.

The Winnie’s Magic Scatter Feature sees Winnie placing a spell on one of the symbols on the reels, converting it into a scatter when 2 other scatters are on the reels, awarding an extra win and triggering one of 3 Mega Magic Features:

Join the fun and fill your pockets with magical winnings! 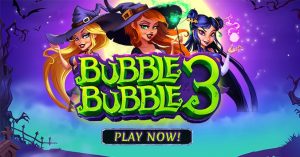 21 thoughts on “Bubble Bubble 3 Slot Hotter Than Ever”