Slot “Dragon Orb” is one of the most popular and because of that, it isn’t surprising that this slot is on the list of 5 most played slot at Casino Extreme in 2018.

This fantasy-themed game for RTG has fantastic visual animations, substituting wild, free spins, and bonus re-spins. It is the 5-reel slot with 10 variable paylines and all symbols pay left to right and right to left. Five of a kind pay once only.

Dragon Orb is Wild on reels 2, 3, and 4 and counts for all symbols. Dragon Orbs appearing will expand to cover all positions on their reel, before pays are awarded. A Wild Re-Spin is triggered when 1 or more expanded Dragon Orbs appear.

Venture into the realm of a fierce treasure dragon guarding his wealth in “Dragon Orb“, the stunning slot from Real Time Gaming! 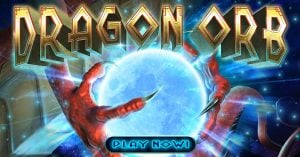