“Fire Dragon” video slot is part of the RTG’s Jackie Chan series, such as “Eagle Shadow Fist” and “Fantasy Mission Force“, made by the most popular Jackie’s movies. To create this slot RTG has picked another more movie with martial character, “Fire Dragon”, an action-adventure presenting the story about a team sent to retrieve a secret file form the enemy’s base at the island of the Woman Warriors.

The latest release 20-variable-payline slot is all about martial arts movie stunts, car chases and the Chan man himself with a brilliantly-executed combat ready stance. All symbols pay left to right in this 5-reel slot and a substitute symbol is Jackie. The Wild may substitute for any symbol except Scatter.

Ninja Masks play the role of scatter symbol and when 3 or more appear, ninjas will climb down ropes, and throw their flash bombs to vanish not without awarding you 10 Amazon Free Games, which can be retriggered. Oh, and don’t forget the jackpot will be randomly hit any moment.

3 or more Scatter symbols appearing anywhere triggers 10 FREE GAMES. They are played at the lines and bet of the triggered game. The feature can be retriggered.

So join the martial-arts action and start winning! 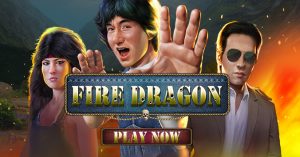