The fantastic world which J.R.R. Tolkien created in his books, “The Lord of the Rings”, developed the whole fantasy industry, including games at online casinos. RTG gets two of many fantastic creatures, Orc and Elf, and puts them in a battle to the death in slot game “Orc Vs Elf“. This game is full of features with the 3D graphics along with the animations and sound effects that all adds up to a great video slot experience. The “Trail to the Fortress of Orcholme” features seven different bonus games, while the “Road to the Citadel of Elveros” offers up a further seven features. When you start playing this game you must choose which character you should be, Orc or Elf. This is used for the Battle bonus and after it concludes you may choose again.

“Orc Vs Elf” is a slot game with 5 reels, 25 paylines that pay from left to right, and two nonprogressive jackpots. 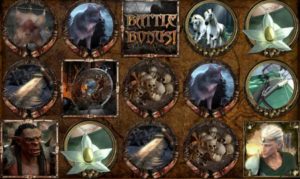 On reel one, the Orc appears as an expanding wild and the Elf is an expanding wild on reel five. These wilds will substitute for any other symbol in the game apart from the scatter symbols. Both the Orc Shield and Elf Shield will count once on their reel as they are the Scatter symbols and will form the scatter wins. Free spins plus the bonus feature will be triggered once you land 3 or more of the same kind.

If you love “The Lord of the Rings” you will be excited about this fantastic slot game which you can play HERE.