Reach out for star wins in Pulsar online slot! It opens up a universe full of fun, planets, neutrons and interplanetary action. In this cosmic-themed slot, a honeycomb grid stages both the randomly triggered Neutron Star Feature and Cascading Wins Feature. Let’s start from the beginning of reviewing RTG’s first release in 2020.

This is the most common type of slot machine with 5 reels. There are 20 fixed paylines and winning direction is left to right. However, Pulsar online slot has a different layout as well, using a honeycomb-style setup, which has 2-3-3-3-2 symbols on the 5 reels. A lot of features that you might expect such as wilds, scatters or free games, are not going to be included in Pulsar. 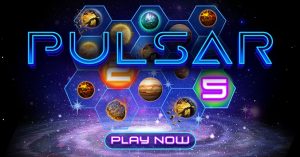