Good people from RTG decided once again to make the video slot inspired by Ancient China. The latest release named “Storm Lords” is full of ancient Chinese warriors and the martial arts for which this country is known. You will enjoy playing this game with a fun theme and which is much better, many ways to win.

“Storm Lords” has 5 reels and 50 variable paylines. All symbols pay left to right except scattered Amulets, and scattered treasure Coins, which pay in any position. Substitute “Storm Lords” is wild on reels 2 and 4, respectively, that count for all symbols except scattered we already mentioned. It always nudges to cover its reel when any part of them appears on that reel.

When 3 or more scattered Amulets appearing on a normal game triggers a choice of 2 features. Players may choose either Wild Reels or Treasure Spins.

Storm into some awesome wins today! 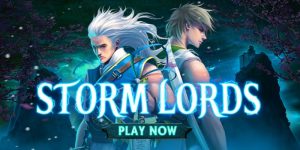