Real Time Gaming gave us another title from the Rudolph vs Santa series just before Christmas. But, Rudolph Awakens slot is definitely not a traditional holiday story. Just to mention, Rudolph is frozen for some reason! Spinning reels on this game would be a unique experience filled with extra games, bonus spins, and sticky Wilds.

This slot has a bonus feature which can increase your chance to win. Rudolph Awakens feature is triggered when Rudolph covers reel 3. 10 free games are awarded, during which any Rudolph appearing will nudge to cover his reel. Rudolph is frozen in ice when he first covers a reel. He will remain covering the reel until he is melted free. 3 extra free games are awarded if the “Extra Games!” symbol appears on both reels 1 and 5 on a free game. Extra Games may only be awarded 3 times maximum. Free games are played at the lines and bet of the triggering game.

The theme of Rudolph Awakens slot is one that we’re familiar with. It’s telling us about a conflict between Rudolph and Santa Claus, which begins just as the holidays are starting and they’re supposed to be delivering presents. Rudolph Awakens is a part of an entire series, so you can check out the others as well. Maybe, you already played Return of the Rudolph or Santa Strikes Back and become a fan of slots from this series. 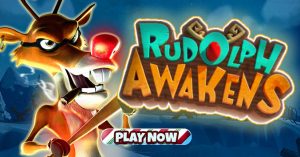