The common wisdom says that the Christmas season starts as soon as Thanksgiving ends but with Extreme’s MasterCard-accepted casino things tend to go as fast as our instant withdrawals. You probably haven’t even finished your shopping wish list for Black Friday, and we’re here to put you into the Christmas mood with our new slot release. Santa’s Reel Wheel is here and along with it, Santa brings to you 30 FS!

Santa’s Reel Wheel comes in a three single-line game special format with all symbols paying any line reflecting Santa’s generosity. And speaking of generosity it’s best seen with the top award that goes 50,000 times bet per line. The symbols are all about the festive season with Blue Diamond serving as the game’s Wild and Fireworks as the Scatter. It’s also arranged in 3 levels with each one of them holding potential for great wins.

Speaking of levels, they’re the primary special feature of Santa’s Reel Wheel. The first level is the primary 3-reel game, with the second and third levels arranged above it. The additional levels are locked at the start of the game but there are a couple of ways to unlock them that look like this:

The locked reels will display a picture of a layer of translucent ice with a locked padlock and a losing combination (with no fireworks). The translucent-ice layer will be animated (as specified in Game Behavior) to disappear after the level is unlocked, and the reel will then begin to spin. All levels in the game are paid and in Free Game’s case, the game starts on Level 2. As far as the wins on Level 3 are concerned getting 1 or more Fireworks Scatters on the gameboard will activate Santa’s Bonus Wheel from the game’s name.

The Santa’s Bonus Wheel Feature provides you with the chance to win plenty of additional bonuses. The main ones being the Mini, Minor, Major, Grand, and Mega Bonus. If Santa’s Bonus Wheel is turned on when you are in the Free Games, they will commence on Level 2 for each Free Game. And activating it during Free Games gets you either additional free spins or the Fireworks Bonus.

Fireworks Feature triggers when it’s awarded in Santa’s Mega Bonus Wheel and it changes the game grid to 15 spinning positions, including the Level 1-, 2- and 3-reel positions. You also get another 3 re-spins with any of the triggering Fireworks held in a position. If a new Fireworks appears in a spinning position, it is held for the remainder of the feature. Then the number of remaining re-spins resets to 3. At the end of the re-spins, all prize values and/or Bonuses displayed on the Fireworks are awarded. And the best prize during this feature is the Grand Bonus of 1,000 times that you get if all 15 positions fill up with Fireworks during re-spins.

Get Your Christmas 30 FS Gift

It’s time to stuff your stocking with Christmas presents and turn them into riches! With a little help from your favorite instant withdrawal casino of course. As usual, all you have to do is leave a review (of at least 20 words) in the comments below. Also, don’t forget to check the terms of the promotion beneath. Wishing you the merriest of Christmas season! 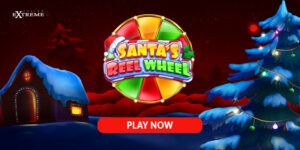