The power of Ancient Egypt has been fascinating the world ever since the ancient burial tombs of Giza were discovered. There, researchers found mummies of pharaohs that became an inspiration for many items in popular culture, including online gaming. Till now, people from Real Time Gaming have provided several Egyptian – themed slots available to play at crypto casino Extreme. Let’s explore them together!

What Are Egyptian – Themed Slots?

Egyptian – themed slots are among the most iconic online casino games and very popular among players. They feature Ancient Egypt theme with all the notable things related to this not yet completely explored civilization.

Visually, these slots are appealing as they feature reels filled with depictions of Egyptian death rituals such as Pharaohs’ death masks or the book of the dead. It allows you to step into the world of Ancient Egypt and to fill your pockets with real cash because these slots often offer big rewards. And the main of the whole casino prizes – jackpot!

As of today you may play this fascinating new slot at instant withdrawal casino Extreme. This 234 ways game can expand up to 576 ways, giving you more winning chances. It brings you Super Expanding Wilds and a lucky Scarab which can level up your game experience with random awards – Wild Reels, Random Wilds, and a Magical Re-spin. 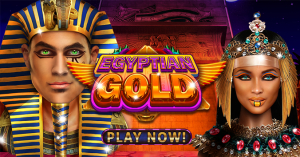 This game is the updated version of one of the most popular RTG slots ever. Jackpot Cleopatra’s Gold Deluxe presents a modern look with an updated game design. At the same time, this slot maintains the extraordinary features which the original game provided. And of course, it’s majesty – the progressive jackpot!

Just like in the original game, Cleopatra is the most important symbol that offers you many great features on 5 reels. In-game multipliers, free games with 3x multipliers, and a network progressive jackpot are something that you can expect to help you win big.

The great emperor, Cleopatra, acts as the Wild and substitutes for all other symbols except scattered Pyramids. Prizes other than progressive jackpot double when one or more Cleopatra appear in a winning combination.  The Scatter symbol is Pyramid and scatter wins are added to line wins. Scatter wins are multiplied by the total bet.

The biggest prize of this slot is the progressive jackpot that is won when 5 wild symbols occur on a payline.

This is one of the oldest RTG slots, but still very popular and often played game. With a classic 5×3 set it offers a random jackpot which appears anywhere and multiplies the total bet. Wild symbol is Boy King that can double the prize except during free game when the multiplier goes up to 16x.

The Boy King’s Treasure free game feature is triggered when 3 or more Snakes appear anywhere awarding 15 free games. During free games when Boy King substitutes in a winning combination the prizes multiply 2x, 3x or 4x times. If two Boy King symbols substitute in a winning combination the multiplier is cumulative up to 16x times. Free games are played at the lines and bet of the triggering game. Scatter wins are multiplied by the total wager. This feature can be re-triggered.

10 thoughts on “The Best Egyptian – Themed Slots to Play Now”