Regardless, how the internet has changed the Blackjack game, players’ skills and strategies are still the most important aspect of winning. Only some casino players can be the masters at the table. Apparently, James is one of them at bet safe and crypto accepted Casino Extreme. He made a Blackjack win for respect, as well as Jason earlier, and in this blog post we are writing about how he got $8000.

You already knew that Blackjack is a classic game of strategy that puts you against the dealer in a contest to see who can score closer to 21 points without going over. Both you and the dealer receive two cards at the beginning of the game. You get to see both of your cards, but only get to see one of the dealer’s cards. It’s up to you to make the call.

James started a game with good cards and very soon got his first win. $200 payout was on his account after the hand where his cards were AH, 7S, 8S, and the dealer’s cards were 6C, 5C, QD. After that, he had several small wins in a row which increased the amount on his casino account.

Two great wins followed one after the other. In both of them, James earned $250 and once more had cards better then the dealer. That was just the start of his great winning strikes. The game became more joyful when he got $250 several times with great cards in his hands.

The real fun started when James got his first win of $500. But, it was just the beginning. One win after another and James scooped amazing $8000.

A real pleasure of playing Blackjack, as well as all other RTG games at Casino Extreme, is a chance to get instant withdrawal. We are well-known for very fast payout which player can get only a few minutes after asking for it. Because of that, players may plan how to spend money, immediately.

Find the right game for you at Casino Extreme and make big wins! You can use big bonus codes in June’s promo. 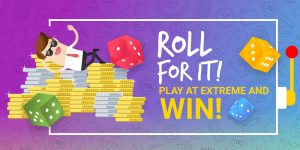