Some players at our casino really know to surprise us! They have knowledge, experience and a bit of luck to win big prizes. One of them is our player Scott which is a master of slot games. He had shown that several times when he played different games and earned a lot of cash. Check out one more Scott’s slot win.

Recently, he tried to open the vault and how he started was not very promising. In the end, he was successful and won $8,572.00 playing slot “Cash Bandit“. The second time he had a huge win of $24142 when he played several slots at our sister Casino Brango. 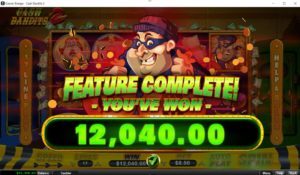 The latest Scott’s win is also big. Again, he played slots and win $20,000. An interesting detail is that he won $18,084 of a complete prize, only playing one game and this is slot “Big Shot“. Once he contacted our customer support he got INSTANT WITHDRAWAL.

We at Casino Extreme take care of our players and always like to congratulate them when he won. So, congratulations Scott, keep it up!

Read about some of our latest winners and check out which games they played. Who knows, maybe you will be our new winner!