People say that the lighting never strikes twice, but it looks like our loyal player Zachary probably wouldn’t agree. Moreover, he could talk about making several winning strikes in one gaming session. One more time, he played his favorite online slot and made a series of wins. Some of them were very big!

The list of Zachary’s ventures at Casino Extreme on the reels of Loch Ness Loot slot is very long . Recently, he also made big wins in a row on this slot and got an $8000 instant withdrawal. Moreover, he’s playing this slot at our sister Casino Brango also, and just a few days ago he got the fastest withdrawal.

As you can conclude, Zachary sticks to Loch Ness Loot. We don’t know what is the reason for his permanent playing of this game. Maybe, one of the reasons is a unique Win-Win feature, which ensures that even the smallest feature win will be transformed into a prize worthy of capturing on film! Whatever it is, there is one more Zachary’s great game session on this slot.

The recent gaming history of our lucky player is full of wins and each of them is above $1000. Apparently, almost every time when Zachary pushed a button “Spin”, he got a big win. Some of these hits were made during the base game and others he got upon triggering the Free game feature.

Among all these big wins, five were outstanding. Two times Zachary hit over $14.000 and that was his biggest hit. The third among these big hits is one that he made during the free game feature and scooped $11,450. Also, he saw the win of $10,100 twice.

Try your luck in the Christmas memory game, get a bonus and win! 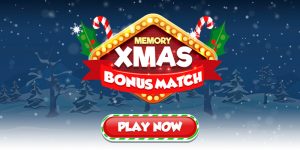