How often do you log in to your account with high hopes? Everyone plays to win and hopefully win big. When it comes to gambling – everything is possible, and life can change with one single spin. Here at crypto casino Extreme players win quite often and today we bring one of those inspiring stories. We’re not sure what to call it, whether it was good karma or the Cash bandits 2 slot smiled at our lucky player’s persistence, but he ended up winning nearly $16k. So, let’s dive in!

We don’t know what the secret to Cash Bandits 2 slot is, but we know that this game is one of the most played at our instant withdrawal casino. Since it was the winning slot, its Free Game Feature deserves special attention. We also call it the Vault feature which isn’t surprising when you know that the main character is a robber who wants to empty it. So, if you are eager to open the vault, you need to know how to crack the codes. However, this particular vault rewards significantly.

The Vault Feature triggers when 3 or more scattered Robbers appear anywhere. 5 vaults and a keypad are revealed and each of them requires a random 1, 2, 3, 4 or 5 digit code to open it. 5, 6 or 8 numbers can be selected from the 10-digit keypad for 3, 4 or 5 triggering scatters.

Any corresponding number in the combinations will lock. 5 free games are initially awarded, with a free games prize multiplier of x2. Completing the 1, 2, 3, 4 or 5 digit combinations on the vault adds 5, 10, 20, 50 or 100 free games.

$16k Worth of Winnings

We’re not sure what type of strategy our fortunate player used while playing Cash Bandits 2 slot but whatever it was, it obviously worked.

There were several different hits – firstly one of $2,850.00 in the base game. Then, the lucky player managed to open the Vault and during this special feature, he got some great wins. First, he hit $7,560, and after that, he had two smaller wins – one of $4,260, and another one was $1,000. All the combined wins amount to nearly $16k worth of winnings! Well done!

You can significantly improve your chances of winning a similar amount on Cash Bandits 2 slot by claiming the Sultry November promotion’s no rules bonus which gives you a 69% boost twice a day! Who knows, maybe we’ll see your story end up in our latest winners category next time. But don’t let that fame go to your head when you finally win. Good luck! 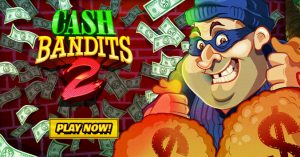