We are absolutely thrilled with the latest win our well-known player Scott made at Casino Extreme. He hit it big playing just one slot, “Witch’s Brew” and one more time earned his name on the list of the latest winners. In this section of our blog, you can find posts about some of Scott’s earlier ventures.

Although this slot has a Halloween theme, it’s very popular among players during the whole year. Not just during holiday time. That is why it isn’t surprising that Scott, as a very experienced player, chose to spin reels on it. And, he brewed up a big win of $11.210! Almost every time he makes a good hit, Scott send us a screenshot. He did that again and you can see it below. 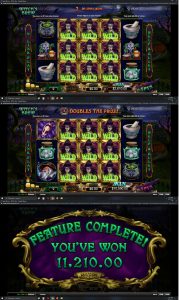 As a short reminder, following are the best features of “Witch’s Brew” slot. The Witch and Dragon Fang are Wild symbols that appear on reels 2, 3 and 4. A bewitching re-spin feature is triggered when 3 of the same Wild symbol appear in any position on reels 2, 3 and 4. These reels are held in place while the other reels re-spin up to 10 times! 10, 25 or a huge 125 free games are awarded when 3, 4 or 5 scattered Goblin Blood symbols appear, with Wilds appearing grouped on their reels during free games, and all prizes are doubled.

With a dash of good fortune and a pinch of luck, you’ve got the recipe for a magical game!

Come play games at Casino Extreme and make some money just like Scott! 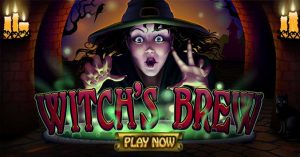