I had a friend. Let’s call him Mike, for the sake of this text. He was the brightest kid in a class. We all looked up to him. He was extremely good at math’s, maybe even the best in the entire school. What we kids did not realize at the time was the fact that he was paying a very high price for his achievements.

Mike’s mother did not like any of his friends. She was a control freak, and she thought that her son was way better than any other child in his class. Without exaggeration, she considered us a lower race. Mike had private tutors and very little time to hang around with the rest of us. Years have passed and Mike moved out of town after high school. He decided he wanted to be a painter and studied abroad. A painter! Do not get me wrong, I highly appreciate anyone skilled enough to make any kind of work of art. I admire artists. However, can you imagine our surprise when we found out that Mike was not going to be a rocket scientist? So, what happened with him to take such a turn in life? My wild guess is that he escaped.

As years have gone by, I read a lot about this phenomenon and learned to recognize the methods used by controlling parents:

While growing up, parents are dominant figures in every child’s life. They are the ones to teach the child to distinguish right from wrong. Nevertheless, there are parents who say one thing and then teach by showing completely different aspect of a certain issue. For example: telling a child that he or she does not need to be perfect and then scolding the child for not scoring “A” on the test. 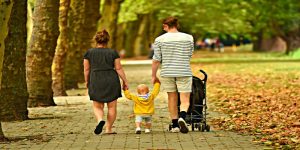 I must admit that personally I have nothing against “Tiger mother” style of parenthood. I think there is nothing wrong in stimulating your child to give his best. However, psychologists say that every child should be given some space to get to know the learning process by himself, in order to understand the meaning and importance of achievements. This can take a while, but once a child gets in tune, the results will follow. Putting too much pressure on a child can be harmful in the long run. A child needs to understand the concept in order to set his ideas free, to experiment and come to conclusions on his own.

Threatening a child to be punished unless he or she delivers results is borderline abuse. The message a child receives in this situation is that he will be loved only when he is perfect, and so he will probably enter the rat race and do his best to win the love of his parents. However, a child will grow up and reach the turning point of asking himself whether it was all worth it. That is the moment when a person can either take the wrong turn or re-examine his life and hopefully decide to live by his own rules.

My friend Mike took the wrong turn. He did not make it. The pressure was too hard for him to handle. I regret the fact we did not stay in touch. I feel extremely sorry that there was no one he felt close enough to call in times of ultimate pain. The weirdest and most bizarre thing that happened afterwards was meeting his mother who still did not realize her own part in this tragedy, let alone feel at least a bit responsible. I know that parents have enormous emotional and material burden to carry. However, they made this choice to be parents. They accepted the roles of caregivers, providers, teachers, protectors. The question that lingers in my mind is: “Since you have been given such amazing gift of being the creator and serving as a base from which world should be explored, why risking it all to satisfy your own vanity?”

Do you know someone who struggles in life due to bad parenting methods?

Editor’s Note: Check out who is mother figure is the gatekeeper of our life.