Believe it or not, Christmas is on the doorstep! We didn’t have time anymore to decorate our house and Christmas tree if we haven’t done so far. But, at the beginning of our Christmas celebration, we can read some fun facts about this holiday.

1. First Christmas cards were sent in the 1840s and it originated in England.

2. Christmas flower in Costa Rica is the orchid.

3. “Find the pickle” is a common American Christmas tradition. A pickle-shaped ornament was hidden somewhere on the Xmas tree and the person who finds it gets an extra present.

4. Bolivians on Christmas Eve celebrate Misa del Gallo (Mass of the Rooster), with people bringing roosters to midnight mass as a symbol of belief that a rooster was the first animal to announce the birth of Jesus Christ.

5. People in Iceland will often exchange books as a Christmas gift. They spent Christmas Eve reading them and eating chocolate.

6. According to Greek legend, evil goblins called “Kallikantzari” would come up from their underground homes on December 25 and would play tricks on humans until the 6th of January. To “protect” of them, people burn logs or old shoes, hang sausages or sweetmeats in the chimney.

7. Alabama was the first state in the USA to declare Christmas an official holiday, in 1836.

8. Christmas was illegal in England from 1647-1660. It was made by Puritan Oliver Cromwell which claimed it was immoral to hold a celebration on one of the year’s holiest days.

9. The traditional Ukrainian Christmas Eve supper has 12 courses, each of them dedicated to one of Christ’s apostles.

10. The idea for electric Christmas light displays was first introduced by Thomas Edison’s assistant, Edward Johnson, in 1882. But, American Ralph Morris invented the type of lights we use today, adapting the from lights used in telephone switchboards in 1895.

At Casino extreme Christmas is already started. We are at a festive mood several days ago and share with you great holiday promotion. Check out and have a Merry Little Christmas! 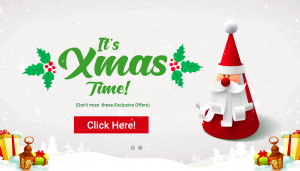