Molly Bloom trained for years to become an Olympic skier, but her career wouldn’t go away in sport’s success. Her name was well-known in the world of gambling and Molly become a “poker princess”!

Born in a family where her father is a clinical psychologist and university professor, mother ski and snowboard instructor and brother is an American Olympic skier and professional American football player, Molly as a child learn that she must push very hard to become a successful skier. After one injury Molly decided to left skiing and moved from Colorado to Los Angeles. She wanted to take a year off before heading to law school. In LA she found work as a cocktail waitress in one club when she met Darin Feinstein. He introduced her to the organization of poker games for VIP players. 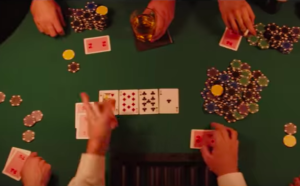 Molly Bloom didn’t know anything about poker when she started, but when she realized who was playing, her mind began to race. Molly learns fast and soon she has a list of clients who want to play elsewhere with her. The first thing that she was doing is to set up tables in luxurious hotel suites at Beverly Hills, instead of the grimy basement. For her clients, she offers massages in a pause of playing poker. Molly was always in service for her clients. If a game lasted for three days, she would stay up for three days. Some of her most known players were actors Leonardo DiCaprio, Ben Affleck, and Tobey Maguire.

After 8 years spent in LA, she moved to New York and that’s where the trouble began. Molly decided to start taking a rake – a percentage of the pot, which is illegal. FBI raided one of her games and the government seized all of her money and Molly arrested. Bloom pleaded guilty to a lesser charge and was sentenced to one year of probation, a $1,000 fine, and 200 hours of community service.

When she finished rehab she returns to Colorado with her mother and starts writing a book about her life. In that moment that was the only way to pay debts. Her memoir “Molly’s Game: The True Story of the 26-Year-Old Woman Behind the Most Exclusive, High-Stakes Underground Poker Game in the World”, was published in 2014. Soon she started to adapt the story for a movie. At the beginning of 2018 appeared movie “Molly’s Game”, based on her book and a true story.