St. Patrick’s Day is fast approaching, and you already got the chance to start the celebration by playing the latest RTG release Paddy’s Lucky Forest slot at crypto casino Extreme. This Irish-themed game launched many symbols related to this day that we celebrate on March 17th. So, we decided to unveil some of the most common traditions that define this Irish holiday.

All About St. Patrick’s Day Celebration

The holiday originally started as a Christian feast day celebrating the life of St. Patrick and the spreading of Christianity to Ireland. Today, it’s a day of revelry and a celebration of all things Irish.

It’s always been a big celebration. Actually, it was a very somber event in Ireland, up until the 1700s. Back then, all one could do on this religious holiday was catch up with friends and feast with their family. After the Irish began to make their way to the United States, however, the need to celebrate St. Patrick’s Day grew and the celebrations around it evolved.

The first St. Patrick’s Day parade in the American colonies was held in New York City in 1762.

Shamrock As the Main Symbol

We wear a shamrock on St. Patrick’s Day because legend says, St. Patrick used its three leaves to explain the Holy Trinity in his teachings. However, there is no direct record that the saint actually used the shamrock as a teaching tool. Regardless, shamrock stayed as one of the main symbols of this holiday.

Today, St. Patrick’s Day is all about green. This color relates to all that is Irish and people are celebrating this holiday wearing green clothes. However, blue was the first color originally associated with St. Patrick. Turns out that blue is the color of the knights in the Order of St. Patrick. It’s also the color that supporters of the Irish independence used back in the 18th century.

The red-haired, green-clothed Leprechaun is commonly associated with St. Patrick’s Day. The original Irish name for these figures of folklore is “lobaircin,” meaning “small-bodied fellow.”

Belief in leprechauns likely stems from Celtic belief in fairies— tiny men and women who could use their magical powers to serve good or evil.

Leprechauns can bring you luck on the reels of the latest RTG release, Paddy’s Lucky Forest slot. Hurry up, and try it! 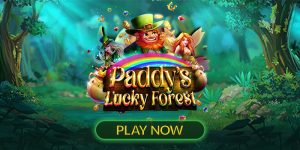 The meals that became a St. Patrick’s Day staple across the country are corned beef and cabbage. Surprisingly, it was an American innovation. While ham and cabbage were eaten in Ireland, corned beef offered a cheaper substitute for impoverished immigrants.