Little boys most like to play with toy cars. Big boys like to drive real cars. But, what you tell about the toy car you can actually drive? This beauty already exists and it was crafted almost entirely out of LEGO parts. The biggest toy car on the Earth is a drivable version of the Bugatti Chiron which was made up of 339 different types of LEGO Technic elements totaling more than a million pieces and assembled without glue. 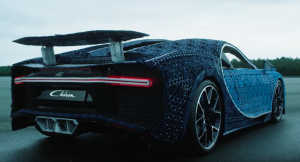 This car can accommodate up to two passengers and showcases many of the same design details of the original Chiron. On it worked LEGO designer Aurelien Rouffiange with a team of 16 specialists.

This life-size model is strikingly similar to its namesake, but it’s not nearly as powerful.

How it was made you could see in a video below posted by LEGO on his official channel.