“Wisdom Begins in Wonder” said Socrates. Our civilization no longer nurtures the famous seven wonders. However, there are alternatives. Are you aware how many beautiful or mysterious places there are in this world and to what extent learning about them can influence our lives? There are localities where massive archaeological treasures are buried under the soil. There are entire cities, baths, roads, tunnels, manuscripts, priceless artifacts beneath the ground we walk on. And they are scattered all over the world. Exploring the subject can change the way you think about the present. Today, we have selected two of the mysteriously amazing and precious archaeological sites. 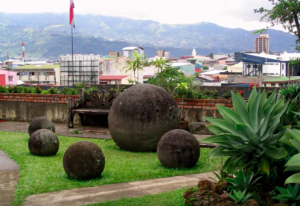 The amazingly smooth surface of granite-like stone spheres keeps provoking the archaeologists still today. These spheres were discovered at the beginning of the 20th century, around 1930, but were taken for granted at first. Only in 1948 did serious excavations start, raising interest among reputable scientific departments, Harvard included.

The spheres are scattered and vary in size and diameter, from a few centimeters to over 2 meters, and weigh up to 16 tons. The researchers were not able to establish the exact date of construction, but they claim the stones were “produced” between 200BC and 1600AD. Apart from its 96% accuracy in sculpting the smooth surface of the sphere, another puzzling fact is that the granite-like material used for carving out the spheres was found almost 30 miles away from the largest sphere which was found. So, how did they manage to transfer it? The Costa Rican Spheres have inspired a lot of legends, one of them being the story about the natives who invented the potion to soften the rock. Another legend tells the story of a single precious coffee bean planted at the very center of the stone sphere. We guess we will never know the exact way of manufacture or purpose of these amazing objects.

We all heard about ancient Greece being the cradle of the European civilization. Well, guess again. The remains of the oldest Neolithic civilization in Europe actually lie in a small town of Vinca, on the right bank of the Danube river, some 15km outside downtown Belgrade, the capital of Serbia. So far, this is the oldest “late stone age” settlement that the world knows of.

Not only was this place one of the first urban societies in Europe, but the researchers claim that it was highly developed for that time, especially when it comes to living habits, pottery, trade, and the fact they managed to live in peace for more than 1,000 years. Vinca settlement was estimated to be more than 7,000 years old. It is believed to had been the center of a civilization which spread across the territory of Serbia, Bosnia, a small part of today’s Croatia, Bulgaria, Romania, Montenegro, Macedonia, and Greece.

The tools that were found there are made of bones, stone and volcanic glass gathered in the region of Carpathians. The houses featured a system which is the basis of modern floor heating. In Stone Age! Can you imagine? What makes this place even more mysterious is the fact that archaeologists found pottery and clay tablets with engraved symbols, and some of the scientists are still debating whether these symbols could be considered ancient language, older than Egyptian hieroglyphs or Chinese pictographs.

The National Museum in Belgrade, Serbia stores the clay tablets on which the Vinca symbols are engraved, and still waiting to be deciphered.

An American, Shan M.M. Winn, wrote his PhD on the subject back in 1981. His book “Pre-writing in southeastern Europe: the sign system of the Vinca culture” was a ground-breaking work and foundation for future scientists to explore this topic further, especially the linear character of these symbols in comparison to the more primitive, pictographic symbols found much later in other parts of the world.

It makes you rethink the history as we know it. Don’t you think so?