There’s a popular anecdote about a famous scientist who was asked about the reason he has a horseshoe hung above his doorway as a sign of luck and whether a man of his position truly believes it works. His answer was that they told him that it brings luck even when you don’t believe in it. That’s a good logic to apply when it comes to lucky charms amulets. Whatever your take on them, they will surely bring you some positive vibes. That’s why we’re about to present you with our list of top 5 lucky charms to boost your luck.

Since we already mentioned it, why not start with the horseshoe. The horseshoe is one of the oldest lucky charms symbols, with many legends around how it became so. The first one attributes luck to it because it is made of iron whose touch was unbearable for mischievous fairies. The more popular version states that St. Dunstan got an order from the devil to blacksmith a shoe for his horse. He did it to the devil himself instead who swore to avoid any house with that symbol if he can release him from his pain.

The next one is probably the most famous of all the lucky charms symbols out there. The four-leaf clover is an ancient symbol that people associate with the rebirth of spring. Some estimates proclaim that four-leaf clover comes on approximately every 10,000 three-leaf ones so it’s pretty obvious why people would connect it with good luck. There is quite a bit of theory surrounding this symbol, but the most famous ones are about Ireland and St. Patrick which had a proper celebration at our instant withdrawal casino. So, if you feel particularly lucky today, go pluck one out of the field and try it out on our St. Paddy slot.

The rabbit’s foot is a lucky charm symbol across many different cultures. There’s a cloud of mystery about the origins of the belief but it is present all over the world. From Celtic to African-American folklore the common theme is that the rabbit must possess certain attributes such as being killed at a certain place and time. That’s exactly what the gun-wielding Granny is trying to do in our Run, Rabbit, Run slot, so why not test your luck by trying to save them instead.

Lucky Fortune Cat or as the Japanese call it Maneki Neko (“beckoning cat”) is a popular lucky charms symbol from both Japanese and Chinese culture. They believe that when a cat raises its right paw it brings money, while the left paw attracts new customers. No one knows the true origin of how it came to be a lucky charms symbol but there is one popular legend from Japan. It states that a rich man was seeking shelter from the storm underneath a tree. He saw a cat inviting him to the nearby temple and chose to follow her. That proved to be a sound decision because lightning struck the tree he was hiding beneath. So, it does seem there is a connection between cats and good luck because our new Copy Cat Fortune game is topping the list of most paying games ever since it came out.

And lastly, we come to one of the most recognizable lucky charms symbols you can get your hands on. The Laughing Buddha or as Westerners call it the “Fat Buddha”. The Laughing Buddha presents a chubby individual who sits on top of a bed of coins. One of the theories is that he has a pot belly because of all the negative energy he consumes from his owners’ house. The bigger his belly the bigger the wealth and prosperity he bestows. And there is also a belief that if you rub it, good fortune will follow you. Do that, and we’re sure our Fortunate Buddha slot will bestow it to you too! Wishing you the best of luck with or without lucky charms! 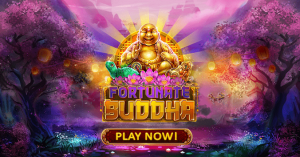