Recently I came across a few similar stories about women who decided to donate a kidney each to other people, risking their health and lives. They claimed that the problems of other people resonated with them and they could imagine being in other persons’ shoes. One young woman, a mother of two young boys, decided to give away a part of herself to a complete stranger, so she could enable this other woman, also a mother, to keep on living and be there for her children. I must admit I respect this choice and regard it as highly altruistic – which brings me to the main topic of this text:

What motivates someone to harness all his or her superpowers and go a step further in order to help out or simply make someone‘s world slightly better, safer and prettier?

Superheroes are models. Their deeds are considered to be heroic and noble. We look up to them while growing up, without realizing that superheroes were modeled after us. If we take away the superpower, each of the superheroes we liked to watch or read about had moral characteristics of an ordinary human: ability to differentiate good and bad, willingness and courage to help others, strong moral compass. Once we grow up and realize that there are no super powers, at least not in the way described in fairytales, do we manage to find alternative powers which can propel an individual into an outstanding one? After investigating this subject in detail, what I came up with as the main drive for putting all our efforts into action is – love: 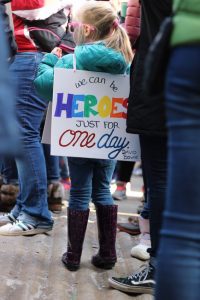 They are the true superheroes, if you ask me. A superhero is perceived as someone who manifests a super ability and self-sacrificing.   It does not have to be a mythological figure. Superheroes are among us. I bet that there are ladies out there who, on good days, feel like Captain Marvel and Wonder Woman combined, juggling daily tasks while walking on high heels.  On a bad day, all you good men and women probably just wish to keep to yourself and go through the day. Just remember to hang on to the motivation to push the boundaries of what you considered to be your strength and align yourself with giants. The person who motivates you does not have to be the love of your life, or your child, or someone close to you. Sometimes, an authoritative figure can be the one who inspires, who leads by example. If you did not come across such an individual, consider becoming one yourself. Sprinkle some magic and be someone’s superhero, because “tough times don’t last, but tough people do”.