Did you know that during the rule of the Tang dynasty, which included one of our main game characters, Wu ZeTian, the so-called Lantern Festival was introduced, marking the beginning of the new lunar year? What is even more interesting, is the fact that the same period is mentioned when we talk about the riddles on red lanterns. Solving those riddles is called cāidēngmí.

Tang dynasty rule was also the time gunpowder was discovered by alchemists trying to find the immortality serum. Firecrackers loaded with gunpowder were the logical step ahead, as people believed that noise would scare away the bad spirit from the ocean’s depth called Nian (in Chinese: year). This spirit was said to visit the humans on this exact day of the beginning of New Year, trying to eat all the grain and livestock. Allegedly, Nian also feared the red color, so people used to hang red decorations everywhere, and they still do it today.

The lanterns have also been red ever since. The riddles that people attach to it are meant for enjoyment. The answers to these riddles are usually words of wisdom. Both children and adult play the game of guessing.

Whether you like to play the game of guessing, or the game of luck, we invite you to play our amazing game with Asian themes, WuZeTian to honor the beginning of the Chinese New Year! 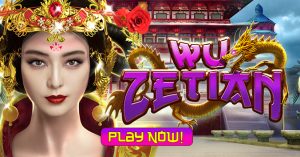