We said goodbye to a fantastic month and all the good stuff it brought at your favorite Casino Extreme. One more time we can say that we managed to be the place of the best new RTG games, great promotions, and some really nice payouts. In April we celebrated Easter and players at our casino had the opportunity to redeem differently coupons with great offers for seven days before the holiday. Well, let’s start from the beginning!

Amigos, RTG this time made a five-reel slot which means only one – party! “The Mariachi 5″ is a blend of awesome graphics, lively music and lots of prizes. This slot has 243 all ways paylines and winning direction is left to right. Substitute symbol is a yellow letter WILD and it is a grouped symbol on reels 2 and 4 and counts for all symbols except scatters. Each WILD doubles the prize when appearing in a win in normal games. When 3 or more scattered symbol Piñata appearing anywhere you could trigger the Bonus feature. When that happened, the player can choose one of the several free spins options. Seems that our players liked slot “The Mariachi 5” and gladly chose it to play at Casino Extreme. 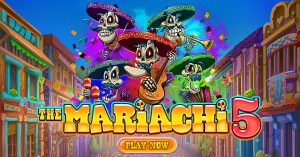 In April we celebrated one of the most important holidays in the Christian religion – Easter. In the spirit of it, we prepared great promotion for our players with many coupons and big prizes. Every day from April 15th to April 21st we have different offers and you redeemed most the coupon which was available on Sunday, on Easter day.  Our player Stephanie used Easter promotion coupons and got great $2156 cashout. Also, on our blog Extreme Magazine, players wrote to us how they celebrate this holiday and for that got 35 free spins.

April was the month of some big cashouts and great wins. All of us were surprised when just one single spin twice led our player Sydney to the great win of $25.194. She played several slots, but the most “Shanghai Lights” and “Panda’s Gold”. Gary chose Bitcoin to made his deposit and made a great $11797 playing these slots: “Bubble Bubble 2“, “Plentiful Treasure“, “Fucanglong“, “Lucky 6”, and “Asgard“. A bit of luck had Jeffrey and in just one spin got win $1644. Our well-known slot player Summer won $2300 playing slot “Three Kingdom Wars” and $925 playing “Aztec’s Millions“, the slot with a progressive jackpot which is currently amazing $3.109.184!

Video slot “Gemtopia” is, for sure, one of the most popular games at our casino and it is proved last month when it was the most played slot. Players also mostly chose the play another two slots:  “Aladdin’s Wishes” and “Cash Bandits 2“, which is also very popular.

Games that gave the biggest payouts in April were: “Shanghai Lights“, “Lucky Tiger” and “Hockey Hero“.

We expect that May will be one month to remember. So, there is no better time to SIGN UP/LOG IN and play the best RTG games at Casino Extreme!