Some of us took some time to relax in August and charge our batteries for the upcoming events. Others among us worked on Extreme Revamp to bring our bet safe and crypto accepted casino a completely new look. Many of you enjoyed our games and visited us to cool down in those hot summer days and nights. We appreciate it and are always glad to see you here. This is a monthly recap, as we revisit the colorful August at Casino Extreme once again.

In many parts of the world, August is the hottest month of the year. What better suits hot days than a promotion to wake us from laziness. During the entire month of August, our players were able to participate in our Free Spins Elevator promotion. Many of you  got into that elevator and later did not want leave. It had 7 levels (or floors) and the number of free spins increased as you advanced to higher floors. Each floor offered amazing bonus up to 200%. The promotion included coupons to some of the most popular RTG slots.

We launched one more promotion on our blog, on the last day of August. It concerns the latest RTG slot release, and you can read all about it in the next section of this text.

August at Casino Extreme surprised us with a very popular new game “Achilles Deluxe”. As you had the chance to read, it is a slot with 2 special Free Games Feature which proved to be quite attractive to many of you out there fighting Achilles, or taking his side in the most famous battle of all times!

In case you did not have a chance to try out this slot, hurry up, because the blog promotion will end tomorrow, Wednesday, September 2nd. If you wish to get 50 free spins for Achilles Deluxe, spin the reels on this slot, leave a review on our blog and get your free spins! 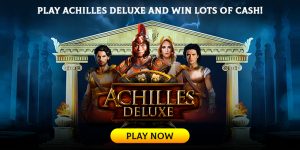 Have we mentioned how much we like our winners? We admire their perseverance and celebrate their success every time! In August, our top winner was Adrian who managed to hit the remarkable $18.375 on Mystic Dragon slot! Also, one of our most loyal player, Scott won $7,906 on Cash Bandits 3.

Most Played Games in August

The games you played the most during August were no surprise. Cash Bandits 3 took the lead, followed by Gemtopia slot.

Among the most popular slots we found Plentiful Treasure, Halloween Treasures, and Wild Hog Luau.

Most Paid Games in August

The games that paid the most in August were surprisingly Mystic Dragon, the slot wrongfully forgotten until Adrian hit the astonishing win (see above). Apparently, a bit older slots can sometimes truly surprise us.

Kung Fu Rooster and Naughty or Nice 3 were two more games that brought significant amounts of cash to our players.

One last time, we say good bye to August and invite you to stay alert as we have new promotions coming your way soon!