Hello, dear players! In the past month, you showed us how truly worthy of respect you are. The strength you have manifested while playing our games and winning in them is honestly amazing. Because of that, we are happy to announce our February review. Here is a quick monthly recap at Casino Extreme!

Let’s start seriously right away. The past month was marked by huge withdrawals our players have made. The biggest one was $31,034.95, but the second which was $24,299.78, and the third – $22,497.95 don’t lag behind. Besides, all these withdrawals were instant, which means the players got the money in their pockets with lighting speed. We are known as instant withdrawal kings, and that’s for a reason.

Now, promos! As you are well aware, in the past month we had two huge events: Super Bowl and Valentine’s Day. We are trying to keep up with all the major happenings because in that way we can prepare a lot of big gifts only for our dear players.

For the Super Bowl, we have put together a monthly promotion, so you had a chance to claim 20 free spins every day. Plus, for half a month you had one coupon code on offer and another half of month different code, but with great tiered bonuses. In the end, there was also a Super Bowl Tournament with a prize pool of $20,000.00. Over 2000 players joined our tournaments and T-Rex was the most popular game of them all.

Yet, that was not the end of it. We have to add that we, as a Valentine’s Day gift, had increased our withdrawal limits during February. The weekly withdrawal limit was increased 3 times! That was something, don’t you think? Also, we had a great new pokie game, Thai Emerald. You should check it out if you haven’t already! 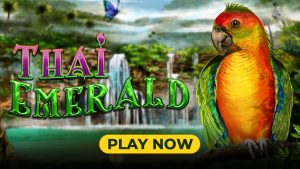 What about the most played games at Casino Extreme? Slot games, as usual, are on our list. We are happy that we see our relatively new game Lil Red is on this list, with some old but gold games, like Plentiful Treasure. Honestly, we always try to have a little bit of everything for everyone, as you can see from the list below.

If we are talking about the most paying games, we should mention slots once again. Yet, this time we have a lonely island in the slot sea, a video poker game Double Double Bonus Poker. Generally, video poker isn’t so different from slot games, as the resemblances are obvious. You can read more about it on our blog. Now, let’s check the list of the most paying games:

This was a monthly recap. We promise you things are heating up as we have prepared something extra for March. So, stay with us at Casino Extreme and be prepared to be blown away.