The weather’s getting cooler, the leaves are falling down and we just know that autumn or fall, whatever you say,  has come. However, Americans told “Goodbye summer” one month ago, on Labor Day which is the unofficial end of summer for them. This period was very excited at your favorite Casino Extreme. Come and join us in our walk through the most important news in September.

The game “Scuba Fishing” is three-reel all ways pay slot with 27 ways to win. The shark which is a substitute symbol swimming around the reels gives you big, mega, and huge wins. This game no scatters symbol and wild substitutes for all other symbols. The re-spin feature is triggered when 3 wilds stack up on the middle reel. This slot gives you the opportunity to win up to 7,500 times the bet per line in a single spin.

You like to play tournaments at Casino Extreme which could bring you a huge win. The September most played were Free Daily Spins tournaments in which participated more than 200 players. 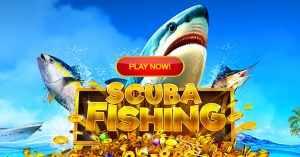