One of the things that we at crypto casino Extreme are especially proud of is our customer support. These fellows are absolutely amazing judging by the comments of our players. One of the most frequent questions that they are getting on a daily basis is about the hot games, those with the biggest payouts. Today we will try to do the job on their behalf and reveal to you the most profitable slots during the last seven days.

In this RTG release, you have the chance to go back in time when dinosaurs roamed freely and T-Rex was the most feared dinosaur in the neighborhood. But there is no need to fear T-Rex in this game. He is a favorite awarding the doubled prize when used in a winning combination. So, make sure to come prepared and ready to search for the dinosaur eggs, they are filled with free games!

T-Rex is acting as a Wild symbol in this game which only appears on reel 3 during normal games. The bonus feature is triggered when three or more scattered eggs appear anywhere. You may select each Egg to reveal up to 10 free games per Egg. When T-Rex appears on reel 3 during free games he will eat all other dinosaurs appearing on screen and replace them with T-Rex symbols, before payment is awarded. The feature can be retriggered. Free games are played at the lines and bet of the triggering game.

At the conclusion of any game, any player, playing any denomination, may be awarded the random jackpot. 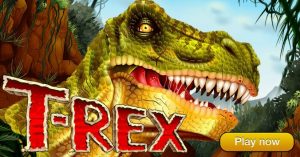 It seems that The Three Stooges title became very popular among players as well as the TV show. That motivated people from RTG to make two sequels. The Three Stooges Brideless Groom has two special bonus rounds that can bring you many chances to win.

Re-spins are triggered when Stooges (or Wilds) cover at least one middle reel in normal play or Lucky Stooge Spins. 1 or 3 re-spins are awarded for one or two covered reels. Only the Stooge Picks can be triggered from the re-spins. Improving from one covered reel to two on the re-spin awards 3 extra re-spins.

The Stooge Pick feature is won when Stooges (or Wilds) cover reels 2, 3, and 4. You should pick from the Stooges until you find two parts of the broken heart. Picks can add free spins, Whacky Wilds, or increase the Multiplier. Whacky Wilds turns Shemp, Larry, or Moe Wild when they appear on all positions on reels 2, 3, and 4, respectively. The Three Stooges Re-Spins are not active during these free spins. 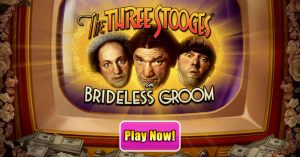 All stadiums are different, and Football Fortunes is one with a never-ending kick-off-season – a magical place to enjoy the king of sports.

You can play in Rhino Mode and win up to 100 free games with prizes tripled, or you may want to try the Fortune Mode which gives you a chance of triggering 8 Free Games at the end of any normal spin!

If extra mini ball icons appear on all reels during free games, you’ll be rewarded a Penalty Kick Bonus in which each successful kick awards you bigger prizes! Shoot the final Golden Ball past the goalie and triple your prize pool!