Baccarat is a casino game that is loved the same in the gambling halls of Las Vegas as is in your favorite online casinos. It has been one of the most played games for centuries and even appeared on the big screen as the favorite game of the fames  oo7 agent, James Bond.

Baccarat of today is one of the most played game, historians disagreed on its origin and where it first started. One thing they all agree for certain is that in tis various forms the game have been popular since the 19th century. In that time, Baccarat was the game of aristocracy and an especially enjoyed among French royalty. In France, there is even a town named Baccarat which testifies to the popularity of this game.

How to Play Baccarat

When you open the game Baccarat at Casino Extreme lobby, you will see three sections on the table on which you can bet: Player, Banker, or Tie. This game might seem difficult, but this is one of the best games for beginners. Generally, it requires no skill as players simply bet on the outcome of two hands between the player and the dealer. 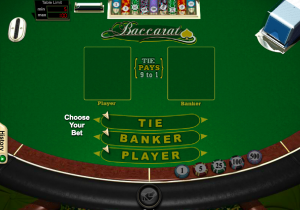 In Baccarat, two cards are dealt to the Player hand and two to the Banker’s hand.  You are not the “Player.” The Player is just one hand on which you can bet.

The goal of Baccarat is to predict which hand will score closest to nine points. You can bet on the Player’s hand, on the Banker’s hand, or on a Tie. The values of the two cards of each hand are added together, with the object of the game being to achieve a total as close to nine as possible.  If the value of the cards is greater than 9 points, drop the digit in the tens position.

For example: If a player is dealt a 6 and a 9, the mathematical value of the hand is 15, but by subtracting 10, the true value becomes 5.

A hand of eight or nine points is considered a “natural” and automatically wins unless there is a tie. If both hands have a “natural”, the hand with the highest point value wins. However, if you bet on the Banker or Player hand and both hands have naturals of equal point value, your bet is pushed back to you. In the event that neither hand has a natural, each hand is dealt a third card according to rules governing how the Player and Banker’s hands are dealt.

You have two possibilities to win at Baccarat. If you bet on the hand that has a higher point value and does not tie with the other hand, or if you bet on a Tie and the Banker and Player hand tie.

Rules for drawing the third card

Now newbies and experts alike before you playing Baccarat for real money, we recommend you practice online. It’s the best way to improve your gambling technique and build you confidence in the game.

Once you are ready for real money fun

Experience the real-time entertainment at any of our Baccarat tables today as well as add to your overall fun with some of our exclusive bonuses.

If at the end you are simply a Slot games lover do not miss out on our latest release, just in time for the holiday season we have added Naughty or Nice III to our collection of awesome games. 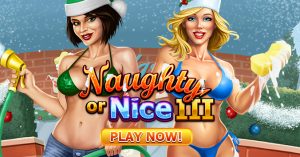