Monster fish, sea serpent or a dragon are all names for the creature that reportedly lives in the depths of the lake in the Scottish Highlands. Loch Ness has been the center of a conspiracy theory for decades. Apparently, the lake hides the creature that very few people had the privilege of seeing. Blurred photos and folk tales are the only things that left us wondering: Have you spotted Nessie lately?

The RTG slot “Loch Ness Loot” is centered around the mythical creature and its appearances. Playing this slot, a player actually hunts the Nessie. The setting includes the Scottish Highlands with its calm lake water and a famous monster lurking around.

The slot features a 5 x 3-reel grid that offers Nessie Hunters 25 pay-lines to try and spot Nessie. However, we have to warn you. It is crowded there. Everyone is on the watch out. Your job would be to not just try to take the picture of Nessie. Although this can get you 500 coins. Your main job would be to find the cameras of other hunters and earn 1,250 coins. Moreover, you would be able to earn up to 2,000 coins if you manage to sink your opponent’s boats.

Spotting Nessie 5 times can get you 2,500 coins. Naturally, as you advance on your way to draw the Nessie out of the water, she gets angrier. So, she would most probably make splashes with her tail knocking other symbols around and replacing them with more winning pay-lines.

The hidden treasure will also be waiting for you at the bottom of the lake. Should you manage to find between 2 and 5 bags of treasure, your total bet will multiply between 1 and 25 times.

The first time that Loch Ness monster was mentioned publicly was back in 1933 in a newspaper article. The story originates from the Scottish Highlands. Nessie, or Lochie as some may call her, is a mythical creature that appears every now and then. She is very large and stirs debates over whether she may belong to a certain type of dinosaurs.  Till this day, we have no real evidence of the existence of Nessie. However, people enjoy the stories, the mystery, the unknown, and the ever-rising question of: what if?

One of the first descriptions of Nessie, published in 1933 read: “The creature disported itself, rolling and plunging for fully a minute, its body resembling that of a whale, and the water cascading and churning like a simmering cauldron. Soon, however, it disappeared in a boiling mass of foam. Both onlookers confessed that there was something uncanny about the whole thing, for they realized that here was no ordinary denizen of the depths, because, apart from its enormous size, the beast, in taking the final plunge, sent out waves that were big enough to have been caused by a passing steamer.”

Our Nessie is waiting for you! 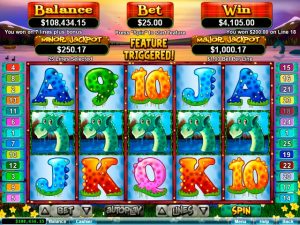