Probably, the best thing related to the online slot is the free game feature. This is something every slot player dreams of when starting to spin the reels. Our loyal player Melanie triggered this feature several times and won $8000. She played several slots but the third was one of the luckiest for her and on that game, she triggered this desirable feature.

Melanie proved that football is not just a men-game and chose to play sports-themed slot “Football Frenzy“. When she opened the “Stricker free kick” feature her account was filed with nice cash. 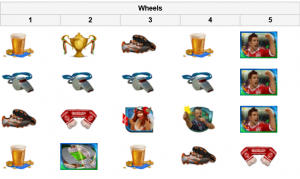 She made one more big win on the slot “Triple Twister” when she triggered the free game feature.

The third online slot which was very lucky for Melanie is “Ritchie Valens la Bamba“. Once again, she got a bunch of free spins when she opened a free games feature.