AP has recently reported on gray wolves’ issue in the region of the Lower 48 states, which sparked a new debate over justification of the decision to lift the protections of the gray wolf habitat. The same ban was lifted eight years ago in Wyoming, Idaho and Montana, resulting in hundreds of gray wolves being exterminated every year.

Ever since the dawn of times, wolves and humans have been living together. A wolf is considered to be a totem in many nations. It is interesting though, that the cult which persevered the longest is the one nurtured among Americans and the Slavic nations, where wolves’ habitats are widely spread.

Today, farmers from the above-mentioned US region see the gray wolf as a predator in search of their livestock. Gray Wolf was at the edge of being exterminated in the mid 70-ies, when the government banned hunting, poisoning and trapping of this particular specie, in order to let them have some time to recover and reproduce. The experts claim that their number has risen from 1,000 to 5,000 in nearly four decades, which is not a sufficient repopulation number in order to take them off the list of endangers animals. Once again, the society is facing the legal battle between wildlife advocates and lawmakers supported by agricultural groups. 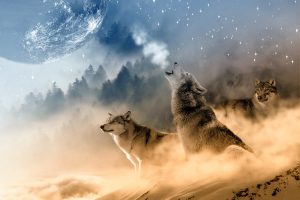 While advocates fight their battle, let us remind ourselves of the connection between wolves and humans that existed through centuries.

Maybe you recall the legend of the she-wolf who raised the founders of Rome, Romulus and Remus. Strangely, the image of she-wolf was elected to represent the motherly figure. Why, when wolves are predators by nature? Maybe the ancient people saw wolves in different light. Is it possible that they considered she-wolves to be committed beings, ready to sacrifice for those less capable of taking care for themselves?

In Nordic and Slavic tribes, a wolf was considered a totem, the lord of the woods, animals and birds. On one hand, a wolf is a protector. On the other, a wolf is a stalker, a predator. Wolves are seen as untamable, independent spirits. On a deeper level, we can talk about their character and unpreparedness to accept betrayal. They are devoted to those who prove themselves to be loyal. This is probably the reason why the researchers of mythology give strong meaning to their connection with humans, because if you come to think of it – when a living being is able to recognize loyalty and betrayal, there is more than meets the eye. Furthermore, as many of us, humans, like to surround ourselves with people close to us, or like to be left alone when we are not feeling well, so do wolves. And they feel the safest among the members of their pack.

What do you think? Should we give these creatures a chance and learn again to live side by side?