Hello, fellow Extreme players! Hope you’re not feeling too sleepy with all the weather that’s kicking in this early September to remind us of the incoming fall. But worry not, we’re here to give you a little boost that’s gonna keep your eyes wide open! That’s right, we’re talking about our new Stairway to Seven promotion where you’ll be able to claim up to $7,000 thrice per day for the duration of the whole month! More juicy surprises await too, so let’s delve right into them!

The Stairs to Success Code

There’s a wise saying that says it’s not enough to simply stare at the stairs, but that one must step upon them. And while climbing the stairs might seem like a demanding endeavor to some of you, with this month’s crypto Casino Extreme’s promo coupon you’ll want to be rocking those stairs as much as you can! Why, you ask? Because the more you deposit and use it the higher your chances of claiming the top award of $7,000 in this month’s tournament of the same name. But we’ll get to that part soon enough. First, let’s see what you get with the Stairs code in the following table:

There will also be several other active codes that involve boosts, no rules, and free spins, so keep a close watch on the updates on our promotions page.

And now we arrive at the most exciting part! This month’s Stairway to Seven Tournament that comes with one of the biggest prize pools yet seen! We’re talking about the gargantuan $35,000 prize pool with the top award of $7,000 for first place. Not to mention the valuable cash, chips, and free spins you’ll encounter on your way to the top 200 positions! All you have to do is start the climb, spin the reels, fill the pocket and we’ll pay you out when September ends! 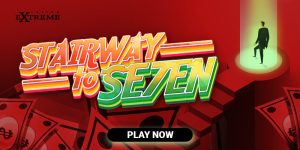